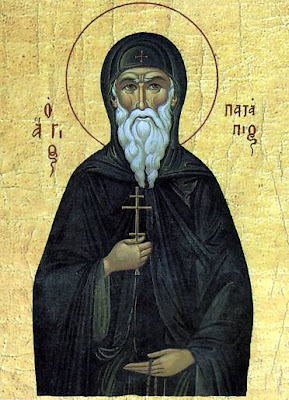 Rebloging from http://full-of-grace-and-truth.blogspot.com/2008/12/miracle-of-st-patapios-of-thebes.html
The following story comes from the book: Apostle to Zaire: The Life and Legacy of Blessed Cosmas of Grigoriou, an excellent book about a Grace-filled ascetic and missionary of our times. The book includes the biography of Fr. Cosmas, along with many miracles that have occurred among the faithful there.
"We want the Apolytikion of St. Patapios
One evening a pious Zairian couple arrived at our Mission Center. I knew them very well because they are assiduous followers of our liturgical Services and catechetical teaching. They said to me: 'Father, will you give us the Apolytikion and the Kontakion of St. Patapios?'
'Why is that? And how do you know about St. Patapios?' I [Fr. Cosmas] asked.
The husband replied as follows: 'Recently we have been through a lot of difficulties in our house. We prayed hard at night for God's help. One night I had this vision in a dream. I could see that I was holding tightly onto a rope and walking towards one of our churches without touching the ground, and my wife was walking behind me in exactly the same way. At that moment, a monk came out of the church and said to us: 'Do not be downcast about your problems. Take this Gospel and this prayer-rope, read, pray and call upon my name and I will help you. I am St. Patapios.'
They felt they received these gifts from his hands, and that the Bible was open to the Gospel of St. John. To be sure, with the help of a Zairian, I translated the chants in honour of St. Patapios into Swahili and gave them to the couple, with an icon of the Saint.
On the life of St. Patapios (or Patapius) of Thebes:

"Our Holy Father Patapius was born and brought up in the Faith and in the fear of God by pious parents in the Egyptian city of Thebes [in the 7th Century] He perceived and rejected the empty vanity of the world early in life and went into the Egyptian desert, where he devoted himself to cleansing his heart from every worldly thought and desire for the sake of divine love. When his virtues became known among the people, they began to come to him and seek relief from their troubles. Afraid of human glory, which darkens a man's mind and separates it from God, Patapius fled from the desert to Constantinople, for this wonderful saint thought that he could more easily hide himself from men in the heart of a city than in the desert. He built himself a hut close to the Blachernae church and there, enclosed and unknown, took up again his interrupted life of asceticism. But the light cannot be hidden. A child, blind from birth, was led by divine Providence to St Patapius and begged him to offer a prayer that he might be given his sight and look upon God's creation, and praise God all the more. Patapius had pity on the suffering child and prayed to God, and the child saw. Through this miracle, Patapius's godly life became known throughout the entire capital, and people began to turn to him for healing, comfort and teaching. Patapius healed one eminent man of dropsy [edema] after blessing him with a cross and anointing him with oil. Making the sign of the Cross in the air, he freed a youth from an unclean spirit which had cruelly tormented him, and the evil spirit went out of God's creature like smoke, uttering a great cry. He made the sign of the Cross over a woman who had sores on her breasts all filled with worms, and she was healed. St Patapius worked many other miracles, all through prayer in the name or Christ and by the power of the Cross."
(taken from: www.saintjonah.org/bltn/pent27.pdf) 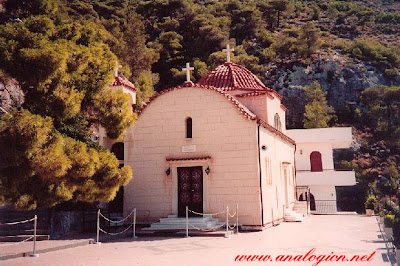 Picture from the Monastery of St. Patapios near Loutraki (The church where the Relics of St. Ypomoni (Patience) are kept, and the Cave of St. Patapios is to the left (according to the directions of an informed poster)) (taken from:http://www.analogion.net/IeresMones/IM_OsiouPatapiouLoutrakiou.htm)
Some accounts say that he passed away in Constantinople, and his disciples later brought his Holy Remains to a cave near Loutraki, Corinth, Greece, and others say that he moved to this cave in life and there reposed. For centuries his Holy Relics remained in obscurity, but were found miraculous and incorrupt 1400 years later by the Grace of God:

"In early 1904, in grooves in the west of a cave located 18 kilometers above the Loutraki, in Geraneia Mountains, the Grace-flowing Relics of St. Patapios were revealed intact and incorrupt. It was discovered as a result of the efforts of a priest from Loutraki named Father Konstantinos Sousani. He would visit this ascetical cave and Church often, and when he liturgized, he constantly had to stoop down because the cave was low. [At this point, I believe that it was unknown that St. Patapios was buried in this cave] Fr. Kostas Sousanis instructed the marble-worker Vasilios Protopapa to excavate and broaden the cave on all sides. While he was digging, in front of stunned eyes of the bystanders in the crypt, they uncovered the Holy Relic and sof the Saint, sweet-smelling, incorrupt, with the flesh and skin still intact and dry. «The body was found on on a cedar wood base by the head and marble by the legs and covered with a series of tiles» (Proskynitarion of the Monastery of Saint Patapios. Sot. Kapsaski, Mousoyrgoy)

On the leather belt that [the Saint] wore was written the name of Saint Patapios, and he held a small wooden cross...The Holy Relic of Saint Patapios, which constantely «has a sweet-smelling, spiritual fragrance» provides the healing Grace of the Holy Spirit to those who come with faith and devotion." (amateur translation/summary of text from: http://www.servitoros.gr/dirfi/view.php/39/660/)

For another account with more miracles of St. Patapios, see:http://www.johnsanidopoulos.com/2009/12/saint-patapios-of-thebes-and-his.html.

For an incredible 360 degree panorama view from the balcony of the Monastery, see: http://www.360visits.gr/panorama_id49. 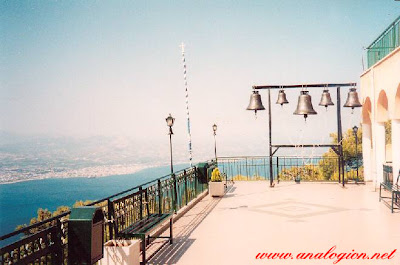 Another picture from the Monastery of St. Patapios, with its beautiful view of the sea and the beach at Loutraki (taken fromhttp://www.analogion.net/IeresMones/IM_OsiouPatapiouLoutrakiou.htm)
Today there is a convent with about forty nuns at the Monastery of St. Patapios (which is 14km from Loutraki, near Corinth, Greece), and many miracles continue to occur for those who call upon the Saint with faith in Christ. Tomorrow (December 8th) is a main feastday of St. Patapios (another feast is the Tuesday after Pascha, when the Finding of his Holy Relics is commemorated), so may we have his blessings. 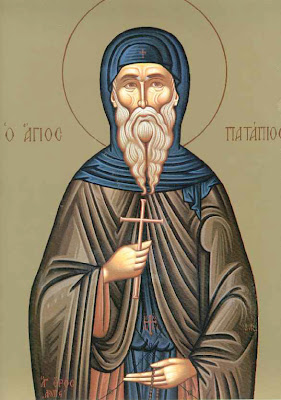 Another icon of St. Patapios (taken from:http://www.rel.gr/photo/displayimage.php?album=26&pos=46)
Apolytikion of St. Patapios in the Plagal of the Fourth Tone
The image of God, was faithfully preserved in you, O Father. For you took up the Cross and followed Christ. By Your actions you taught us to look beyond the flesh for it passes, rather to be concerned about the soul which is immortal. Wherefore, O Holy Patapius, your soul rejoices with the angels.
Kontakion of the Saint in the Third Tone
Having found thy Church to be a place of spiritual healing, all the people flock with haste thereto, O Saint, and they ask thee to bestow the ready healing of their diseases and forgiveness of the sins they wrought in their lifetime; O Patapius most righteous, in every need, thou art the protector of all.
(taken from: http://www.goarch.org/chapel/saints/327)
Through the prayers of our Holy Fathers, Lord Jesus Christ our God, have mercy on us and save us! Amen!
"
Posted by HotelSegas at Saturday, January 09, 2010 No comments: