EUROPEAN POKER TOUR - THE EPT IS HEADING TO GREECE!!!

FOR ANYONE WISHING TO BOOK ACCOMMODATION IN LOUTRAKI DURING THE POKER TOURNAMENT HOTEL SEGAS IN LOUTRAKI IS OFFERING THE SPECIAL PRICE OF € 47,00 PER ROOM PER NIGHT INCLUDING ALL TAXES AND BREAKFAST.


IF YOU STAY FOR THE WHOLE DURATION OF THE TOURNAMENT, 15-20 NOVEMBER, YOU CAN BOOK A ROOM AT THE FANTASTIC PRICE OF € 220 FOR THE ENTIRE STAY.


THERE ARE NO ADDITIONAL CHARGES AND NO HIDDEN EXTRAS IN BOTH RATES.

The EPT is heading to Greece for the first time ever with a stop in the fabulous five-star beach resort of Club Hotel Casino Loutraki, just outside Athens, from November 15-20. 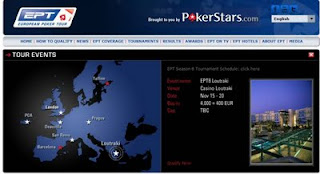 Club Hotel Casino Loutraki will host the debut festival, which is set to include a five-day €4,400 Main Event plus a wide range of exciting side events. EPT Loutraki follows the success of two PokerStars.net-sponsored Greek Poker Cup events - held earlier this year at CHCL - which together attracted more than 500 players from Greece and around the world.

Greek players have already made a big impact on the EPT, with Konstantinos Nanos finishing third at EPT Vienna last season for €265,000. Greek pros Konstantinos Alexiou and George "gkap13" Kapalas have also both made EPT final tables in recent years. Kapalas, who has made several WSOP finals and is leading the Greece All-Time Money List, is one of three PokerStars.net-sponsored "Greek Challengers" who will be competing at EPT Loutraki. The other two are Alexis "J0hnny_Dr@m@" Zervos and Stavros "IDOLLS" Kalfas, who final-tabled the first Greek Poker Cup in March and came third in the EPT6 San Remo €2,000 side event.

Club Hotel Casino Loutraki is a five-star destination situated just 45 minutes outside central Athens, and is one of the largest casino resorts in Europe. It overlooks the most beautiful beach in Loutraki, the coastal spa town famous for its mineral springs. This natural water, with its rejuvenating qualities, is a feature that has been incorporated throughout the resort and its Spa and Wellness Centre.

Satellites for EPT Loutraki will start next month. See www.europeanpokertour.com/tournaments/loutraki for more info.
Posted by HotelSegas at Saturday, September 10, 2011 No comments:

Loutraki 2011 from Athos Papalabros on Vimeo.

Posted by HotelSegas at Wednesday, September 07, 2011 No comments:


On September 7th, on the Eve of St. Mary the Healer patron Saint of Loutraki, the Greek virtuoso clarinet player Vasslis Saleas will entertain local people and visitors at an all night Greek folk and dance music. 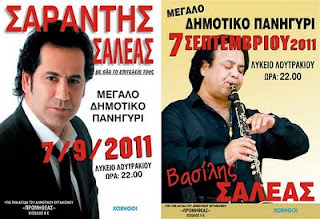 Posted by HotelSegas at Sunday, September 04, 2011 No comments: