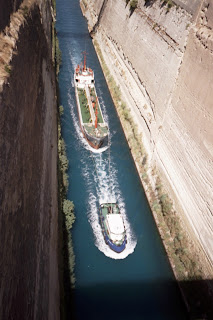 The Corinth Canal separates the Peloponnese from mainland Greece and connects the Gulf of Corinth with the Saronic Gulf. The Canal was completed in the late 19th century and it was an idea and dream that’s dates back over 2000 thousand years during the times of ancient Greeks.The strip of land that connects the Peloponnese and mainland Greece is called the “Isthmus”. At it’s narrowest point, it is only 4 miles wide, and in ancient times, one could see from one side to the other. Before the Corinth Canal was constructed, ships had to travel all around the Peloponnese, which added approximately 185 nautical miles, and several days more travel to their journey time.The Ancient Greeks devised a solution to the problem of the extra length of the ships’ journey when the “Diolkos” was constructed. This was a stoned path, paved with limestone, which ran along from Schinous on the Saronic Gulf to Poseidonia on the Corinth Gulf. The name “Diolkos” means a “movable platform”.The tyrant of Corinth, Periander, was the first who envisioned the Corinth Canal in 602BC, but the technical capabilities in ancient times made his idea impossible to carry out. Instead, he developed the “Diolkos”, which more than served its’ purpose.Along the “Diolkos” ran the “olkos”, which was a wheeled vehicle onto which ships were actually lifted onto, and taken over land from one side to the other. Not all ships could use the “olkos” due to their size, but in many cases, the cargo of ships was taken off at one side, and transported to the other, where a second ship would be waiting to load on the cargo. Today, there are still sections of the “diolkos” that one can still see.There were many others who intended to start the construction of the Corinth Canal, but for a number of varied reasons, the project never took off. Demetrius Poliorkitis, King of Macedon was one who tried in 300 BC, but with no positive results.Amongst reasons stopping him was the belief that Poseidon, God of the Sea, opposed the joining of the Aegean and the Adriatic. This was also a fear that stopped Julius Caeser and Emperors Caligula and Hadrian from starting construction of the canal.The first serious attempt at the canals construction was by Emperor Nero, who in 67AD, announced to spectators at the Isthmian Games that he was going to dig the canal that would "connect the two seas".Nero in fact dug the first piece of land out himself, using a golden pick, and carried this first basket of earth and turf on his own back. However, even though Nero had approximately 6000 slaves who would work on the canal, again, the plan never materialized, for several reasons, including financial ones.The idea for the canal was left unfinished, until it was revived again during the late 1800’s. After several false starts, the Corinth Canal was finally completed, and put in use, on October 28th 1893.The work on the canal was carried out by a combination of French and Greek workmen. The Corinth Canal was actually based on the “Panama ans Suez Canals”, and has often been referred to as the “step-child” of these canals.The Corinth Canal is still in use today, though many newer and larger ships are too large to pass through any more. However, the canal is still used by many smaller ships, and there are also cruises organized where you can travel on a boat along the canal. 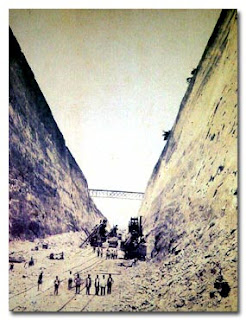 Source: http://ckdboats.blogspot.co.uk/2009/11/corinth-canal-in-greece.html
Posted by HotelSegas at Sunday, September 30, 2012 No comments: 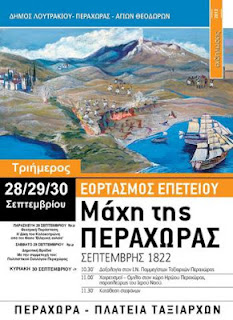 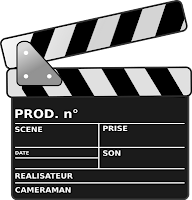 Posted by HotelSegas at Saturday, September 22, 2012 No comments:

By Dimitris Rigopoulos
The last thing you expect after driving through the popular coastal resort of Loutraki, just northwest of the Corinth Canal, is an area where you can achieve spiritual elation among ancient ruins and an unspoilt natural landscape that seems to be lifted directly from a fading 1950s postcard.
Until recently, my only knowledge of Loutraki was that the coastal strip lay past the pine forests of Mount Kithairon and the seaside villages of Porto Germeno and Psatha, both popular with weekenders from the capital. What an oversight it was not to have continued just a little further south to explore the area more. But that’s one of the wonderful things about Greece: Just when you think you’ve seen it all, one seemingly wrong turn takes you to a whole new paradise.
There are probably a few archaeology buffs who are frowning right now, displeased with the fact that the closely held secret of the Sanctuary of Hera in Perachora may come out and draw crowds to a little-known shrine of great beauty.
The Heraion, as it is known, comprises antiquities, unrivaled Mediterranean natural beauty and little modern civilization, with the inevitable exception of a handful of cars and motorcycles, as there is no other way to access the area.
The ruins of the sanctuary dedicated to the goddess Hera dot the entire slope of the hill on which it is built and seem to be frozen in mid-tumble down to the small lagoon below, which is not really a lagoon because there is a small opening to the sea. The lagoon, in turn, is surrounded by a beautiful pine forest and is considered one of the prettiest of its kind in Greece. West of the lake is a peninsula that boasts one of the biggest lighthouses in Greece -- it was constructed in 1897 -- and from the bay, the view over the Gulf of Corinth stretches all the way to the Peloponnesian hinterland.
When you approach the Heraion from Loutraki and Perachora, the first thing you see is the lagoon. Go ahead and jump in if the weather is warm, but don’t expect the kind of refreshing sensation you get from the sea, because the salt content is much higher. The lagoon is shallow near the coast, but gets deeper quite suddenly, while the water also stays warm well into autumn. The loveliest beach in the area is to the west of the sanctuary and has fine white sand. There are also two tavernas, which are best avoided on holiday weekends and during peak season.
A five-minute drive past the lagoon brings you to the archaeological site and the hill where the lighthouse is located. The main temple dates to 700 BC and was dedicated to Hera. In ancient times, the people of Corinth would boat over from the opposite shore to hold homages in honor of the goddess twice a year.
In pre-Roman times, Perachora was a vital spot for the Corinthians, and excavations conducted by the British Archaeological School in Athens in 1928-34 revealed important finds as well as two temples dedicated to Hera. The remains of an ancient agora can also be seen near the main temple, while the aqueduct is of special interest as it was built in 300 BC and is believed to be the work of Demetrius the Conqueror.
In the 18th century, the Church of Aghios Nikolaos was built on the site, on a hill east of the port. The style is typical of a single-vault basilica, but the central part of the church is wedged up against a large rock.
The lovely thing about the Heraion, especially now that the crowds are dwindling, is that you can combine many different pleasures or pick one thing to do as the mood takes you.
The first time I went to the Heraion, I had a picnic with friends on the rocks west of the bay, with a view of the sea and a scattering of ruins. It was lovely. Some in the group went for a swim, remarking on the experience of climbing out of crystal-clear waters onto the remains of an ancient temple.
If walking is your thing, explore the paths around the sanctuary and, if you are feeling adventurous, try the climb to the lighthouse for a very rewarding view. It’s best if you don’t go exploring alone because some parts can be quite tricky, and make sure that children are always supervised.
There are two ways to get to the Heraion: directly from Loutraki (about 18 km) or through Perachora, which is infinitely more interesting, though it does have a stretch of dirt road.
If you are not planning to eat at one of the few tavernas in the vicinity, be sure to take plenty of water and a snack, because it would be a shame to leave before the sunset.

Hotel Segas - "Your home in Greece"
Only 30' drive from Heraion through the Geraneia mountains and the village of Perachora
www.hotelsegas.com
Posted by HotelSegas at Sunday, September 16, 2012 No comments: 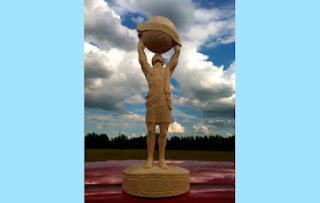 Source: http://iffp.org.gr/el/festival-2012/programma.html
Posted by HotelSegas at Monday, September 10, 2012 No comments: